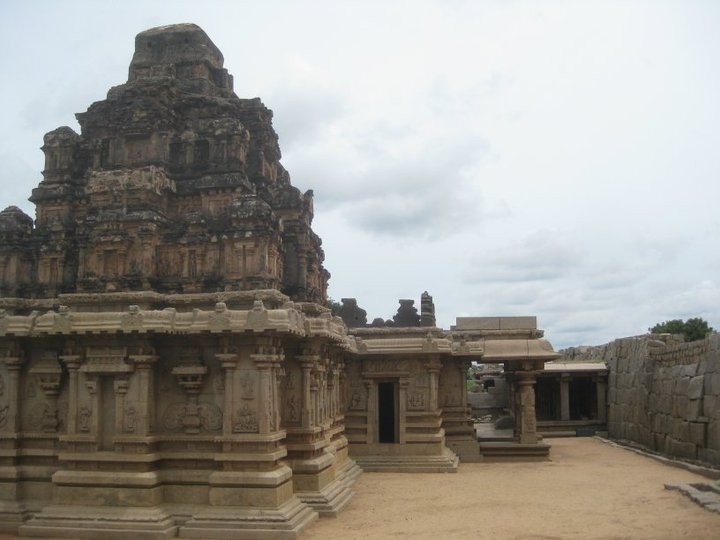 This article was featured on NPR Intern Edition. In this series, Where I’m From and Where I’ve Been, NPR interns told stories of the cities and towns where they grew up and the many adventures they’ve had along the way.

I’ve never written this story down before. I think it is time.

Have you ever heard of a bhang lassi?

To travelers, the town of Hampi in Karnataka, India is famous for two things: it’s incredible archaeological ruins, and its bhang lassis. The ruins are the remains of the powerful Vijayanagar empire, what was possibly the second largest city in the world over five hundred years ago. Massive monolithic stone statues, abandoned elephant stables, and magnificent architecture jut out of the rocky terrain.

That day had been sunny and hot, like the rest of South India. We had rented four single gear motorcycles and took them zooming around Hampi and the surroundings, crossing the Tungabhadra river on rickety spherical wicker rafts where some of us volunteered to work in the rice paddies. After a long day, we returned to Hampi to relax and enjoy our treat, the bhang lassis.

At the time, Hampi had two main locations that sold bhang lassis. Local authorities had shut down one of them for making their lassis a little extra special. So we chose the “Chill Out Cafe,” nestled near the center of town on the roof of a two story building. We ordered four strong lassis for the eight of us and brought the total up to five when another traveler said he didn’t want his.

A few sips is enough to get one sufficiently high. A whole lassi is enough to bring you to a terrifying state.

The effects were delayed. But when they came on, they were immediate. The result of the bhang lassi was a heightened experience that was far too much, far too quick for someone who doesn’t like getting high.

Not having had much food to eat that day, we climbed down from “Chill Out Cafe” and attempted to find a restaurant near our hotel to get some food. I decided I needed to go back to the hotel.

“Brandon, I—I don’t feel well. I need to lie down”

Next, I remember lying in one of the hotel rooms as the world began to spin. Unable to find food, everyone else soon returned to the hotel, and we crammed into one room as we clung on to sanity.

Hysteria has a way of feeding off itself when no one is sober. Ana was on the floor vomiting. I was in the fetal position and had vomited a few times. Tom and Eugene were far far gone. Mary escaped the worst of it and fell asleep. Then we began to hallucinate. Lauren thought her boyfriend Brandon had turned into the devil, and tried to kill him.

Sean, the most sober of us, corralled us all into our rooms, turned off the lights, and told us to sleep. The darkness made the experience more isolating. Soon I began telling Sean I needed to go to the hospital.

I became more persistent as the situation became more horrifying, and Sean asked the hotel owner (who gave us a queer look) for a rickshaw.  The first doctor we saw was having a house party and told us to go away. The second doctor said I needed to go to a “special hospital.” As I was listening to him speak, I thought I heard the words “Stomach pumping,” “permanent psychological damage,” and “tranquilizer.” Around this time, I lost all lucidity.

“Sean. Do I have schizophrenia?”

“Sean. Was there LSD in there?”

“Sean. Was there ketamine in there?”

I remember nearly nothing from this point forward. I do remember entering a building that had white washed walls, men sleeping on the floor on mats, red plastic chairs, and a Hindi children’s show on television. I think it was some form of an asylum.

Later that night, I was released. I vomited a few times more on the ride back.  I thought back to a friend who had warned us before our trip:  ”If you want a near death experience, try the bhang lassis.” He wasn’t joking. At least, as I felt the rickshaw cutting through the wind, I had a smile on my face.

I woke up the next morning with the worst hangover of my life.